Regional seminar for heads of local unions in northern states 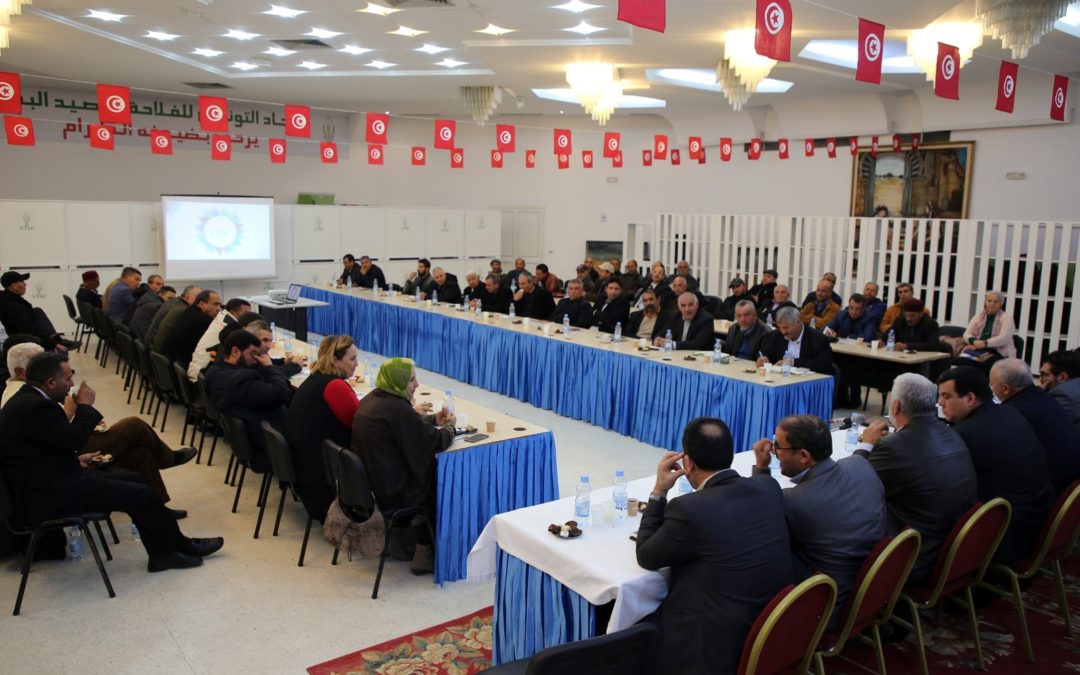 Mr. Abdel Majid Al-Zar, Head of the Tunisian Union of Agriculture and Marine Fisheries, supervised the opening of the regional seminar of heads of local unions from the northern states, Thursday, February 13, 2020. This colloquium was devoted to the follow-up of the activity of the union during the previous period, as well as to the examination of the most important axes of the strategic plan of the union and the program of celebration of the 70s of the organization agricultural.

While the heads of local unions hailed the important and growing role played by the Tunisian union of agriculture and fisheries, in relation to its interest in national affairs and the qualitative change it has achieved in its trade union action and movements on the ground at local, regional and central levels to defend the rights and interests of farmers and seafarers by establishing new militant traditions and strengthening the spirit of belonging to the agricultural organization, which led to the achievement of many significant gains, they did not hide their concern over the catastrophic conditions encountered by all the production and systematic policies adopted by the current government to strike and destroy it, which led to the deterioration in the economic profitability of the agriculture and fishing sector due to the high cost, consequences of climate change, exacerbation of losses, accumulation of debt and the lack of a real political will to resolve the sector’s files and overcome its difficulties and individuals with an alternative mode of development which is the main pillar of the national economy and a major driver of global and equitable development.

And in this context, the heads of the regional union of the North Region raised the following concerns:

• The negative repercussions of the lack of fertilizer during this season

• The collapse in the price of olives, which caused farmers huge losses

• The dramatic increase that input and supply prices have consistently recorded

• Arrangements for caring for irrigated areas and providing irrigation water

• Inform cooperative societies more and accelerate the revision of their basic law and allow them to finance a line to enable them to support and diversify the services provided to the farmer.

• Support to the livestock sector, control of herds and stricter control to reduce theft

He also called on the heads of local unions to support these structures, which are the main pillar of the agricultural organization, and to strengthen its capacities so as to enable it to best play its role of union and of development and raise its performance to a level that meets the expectations of farmers and sailors in all directions.

A number of members of the National Executive Office and heads of regional unions of agriculture and fisheries participated in the regional symposium.